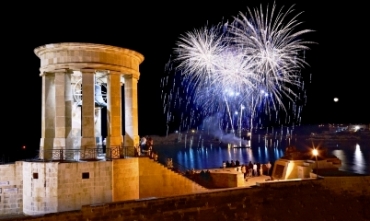 The Ministry for Tourism and the Malta Tourism Authority will be organising the 16th edition of the Malta International Fireworks Festival.

Pyrothecnic displays will take place on:

A number of Maltese and foreign fireworks factories will be participating in this competitive event, presenting spectacular pyrotechnic displays synchronised to music.

The festival forms part of the anniversary celebrations of Malta's accession to the European Union.

Tradition of Fireworks in Malta
Fireworks in Malta have a long tradition which goes back to the time of the Order of the Knights of St. John. The feu de joie using gun salutes, the musketterija firing of muskets, the solfarelli d'aria, St. Catherine's wheels (irdieden) and other forms of fireworks originated from explosives that were lit off from mortars (maskli) as an expression of rejoicing. Special occasions when such festivities were held were: the election of a Grand Master of the Order of the Knights of St. John, the election of a Pope who was the overall protector and ruler of the Order, the birth of a prince from a friendly European state or else to mark an important victory over the Ottoman military might. Fireworks developed into a craft when the Maltese started to celebrate the events connected to their British rulers in the 19th and 20th centuries. This centuries-old tradition is still very much alive in the crowded calendar of village festas that take place all over Malta and Gozo, especially in the summer months.

If you are looking for a short or long term rental or sale properties in Malta and Gozo, ECSM Property Ltd has an extensive database. Furthermore our staff is on hand to assist with finding you a new, luxury or bargain residence on the Maltese islands. For more information and detailed guidance about Maltese properties look at our website www.ecsmproperty.uk.com or drop us a note on ec@ecsmproperty.uk.com We look forward hearing from you.