Luxury properties in the winter sport center of the Dolomites, Northern Italy 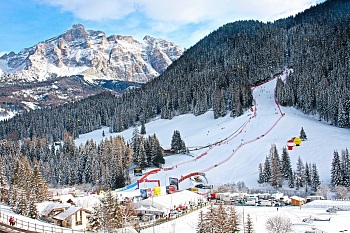 Winter events in the Dolomites

Men's races on the Gran Risa slope in La Villa

International sporting events and an entertaining evening programme for young and old: Alta Badia's events will make your holidays in South Tyrol a diversified and exciting experience.

Naturally, winter-events in Alta Badia are mainly about skiing and open air activities.

In December, thousands of ski enthusiasts meet in La Villa for the Men's Ski World Cup giant slalom on the Gran Risa slope.
Another spectacular event is the Sellaronda Skimarathon, a thrilling evening event for teams who ski around the Sella massif and climb the hills using skins undersides their skis.

The breathtaking descent in the forest begins just below the bifurcation of the black and red slopes of Piz La Ila. After the steep slope at the beginning a rapid curve leads on a steep, narrow channel. After a second change of direction the slope ends up to the finish.

Come and visit Alta Badia in the Dolomites, where we have a great selection of luxury properties in this exclusive mountain region of Northern Italy. Visit our website www.ecsmproperty.uk.com or drop us a note on ec@ecsmproperty.uk.com for more details.