Altissimo- ​The Dolomites' Most Exclusive Brunch 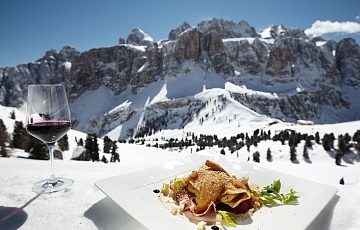 On Monday 17th December 2018 Alta Badia will host "Altissimo", the most exclusive lifestyle event in the Dolomites and the jewel in the crown of the gourmet initiative “A taste for skiing 2018”.

During the last few years, Alta Badia has established itself as an insider tip for skiers and foodies. Given the variety of slopes, the unique landscape of the Dolomites UNESCO World Heritage Site and of course, the high profile gastronomy, Alta Badia has become a favourite holiday destination.

For almost 10 years now, during the winter season, the fascinating interplay between skiing, nature and gastronomy has been celebrated under the motto "A taste for skiing".

In Alta Badia, on a territory of only 15 square kilometers, there are six Michelin stars: three stars for Norbert Niederkofler, two stars for Matteo Metullio and one star for Nicola Laera.

The quality of our gastronomic delights constitutes one of the key elements of what is on offer for tourists in Alta Badia. Those six stars now shining brightly in Alta Badia are cause for tremendous pride and are the well-deserved reward for dedication and commitment. Make Alta Badia your holiday destination, and you will experience culinary pleasures of an international standard.

For the occasion, the three Michelin-starred chefs of Alta Badia - headed by Norbert Niederkofler who is one of Italy's nine three-star chefs, will showcase the gastronomic excellence of our valley. Also involved in the project is Marco Spinelli, chef at Club Moritzino Piz La Ila, the venue right at the start of the Ski World Cup slope Gran Risa where the event is to take place.