​Fierce competition in the Alps between French, Austrian and Italian ski resorts 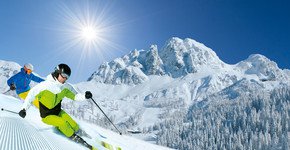 France's ski industry is urging the government to help modernise resorts to combat increasingly fierce competition from Austria and Italy.

France was the world's most popular ski destination for more than three decades until it was overtaken by the United States, with American resorts attracting more skiers than their French counterparts during the 2015-16 season. Austria also surpassed France in the 2016-17 season.

“French resorts face growing competition. If France wants to stay in the race, it must meet three challenges: it must renew its customer base, increase investment and adapt to the lack of snow.

The number of Russians taking ski holidays in France has increased, but France is struggling to attract skiers from Germany, Poland, Slovakia and the Czech Republic, who often prefer Austria and Italy.

Britons make up the largest group of foreign skiers in France, but the French fear they may be lured elsewhere.

Laurent Reynaud of the skiing industry body, Domaines Skiables de France, said: “Skiing is the national pride of Austria and the Austrians are making huge efforts to develop it."

Austrian resorts are easily accessible from Innsbruck airport, whereas the larger French resorts are several hours by road from Lyon or Geneva. Special 'snow trains' via Paris serve the hub of Moutiers in the French Alps, but skiers still need to take buses to resorts.

Dominique Marcel, head of the ski resort operator Compagnie des Alpes, said: “For a long time, we thought it was enough to have the Alps, Mont Blanc and snow to be sheltered from any shortcomings. But that doesn't work any more. Problems of accommodation, transport, crowds and the quality of restaurants are all factors that are important to customers."