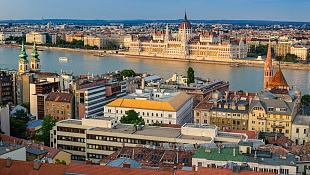 Housing prices rose the most sharply among 29 European Union countries in the third quarter of 2016, according to the House Price Index published by Eurostat, the statistical office of the European Union, on Thursday. The 11.6% increase is way above the EU's 4.3% average.

Whereas the price increase in 2015 affected the entire real estate market, last year's rise had a different impact on different settlement types. Dwelling prices rose by 20% in the capital city of Budapest, 10% in towns with county rights and hardly 1% in small towns. In municipalities, prices dropped, in villages they fell 15%.

The biggest rise in value occurred at apartment blocks, their average price per square metre exceeded 200,000 forints last year. While flats grew 15% more expensive, houses shed 10% of their value in the first nine months of 2016. The reason behind this is that houses are generally located in less-frequented settlements in the country that investors are not exactly crazy about.

Hungarian homes have never been this expensive


The nominal price level is already over the all-time high set in 2008, i.e. homes have never cost more in Hungary (at least on a statistical basis). As for the real value of homes, we are still below the 2008 levels - except in Budapest -, and prices compared to wages are similar to those in 1998-1999.

A single-digit price rise is expected in 2017, as the market is approaching an equilibrium level and the supply of new homes will rise. Yet the gap between the different regions will only widen.

If you would like to learn more about the Hungarian Real Estate market, find a property for residential, investment or commercial purposes, need assistance with your property refurbishment or management, do not hesitate to contact our team on ec@ecsmproperty.uk.com. We have a large selection of Hungarian properties and our multilingual staff will be glad to assist you.